My Pogo Is One Special Little Guy

Good morning.  Guess what?  It's snowing!!!  I took Pogo out earlier for his morning sprinkle, and saw these tiny little white spits falling from the sky.  Let me update that thought.  I have just looked out the window, and there is no more snow.  Hmmm, just a little shower.  Maybe we'll get more later in the day.  I wonder how Pogo will react to snow?

Yesterday, Pogo had his first health checkup at the VCA hospital.  Needless to say, everyone there fell in love with him.  Good food agrees with him because he weighed in at five pounds fully dressed.   Woo Hoo!

He checked out pretty good, but his doctor told me something I did not know.  Pogo came to me without any teeth, but I was not aware that he had no lower jaw bone either.  He was not born that way, and the more I think of it, I get very angry.  I can't imagine what this poor little guy went through for six years and three months before he was rescued.  It breaks my heart to think about it.

It's taking a while to type this post because Pogo keeps hopping up on my lap to play.  He loves cuddling.  So we cuddle.  I love it too.

We have gone through a lot of doggie food brands, but I think we have found one that Pogo likes.  It's called "Paws".  They sell it at the market where his daytime sitter works, so that is very handy.  Today she is working so she will pick some more up for us.

Well, I got a few more gifts wrapped, and a few small packages ready to be mailed.  I think I'm starting to get into the swing of things.  I admit I used a bit of psychology on myself.  I spread everything out on my bed so that I could see what there was.  Little by little, I take something off the bed and wrap it.  Until the bed is clear, I will have to keep sleeping on the sofa.  (I'm more than half done.)

Now I just have to pick up more wrapping paper and a bag of bows.  Then we wait for the rest of the packages to arrive so that we can get those gifts wrapped too.  I've been trying to figure out what to write in my letter to Santa, and it's not easy coming up with things that I want or need.

I'm very blessed and already have all the things that are important to me.  Perhaps I will give extra gifts to the MSPCA and the ASPCA.  I think Pogo might send a little gift to the agency that rescued him.  Yes, that's what I think we will do.

I have something adorable to share with you.  This is one of the designs I came up with while I was working on my cards and my calendar.  Now tell me, is this not the cutest little dog ever? 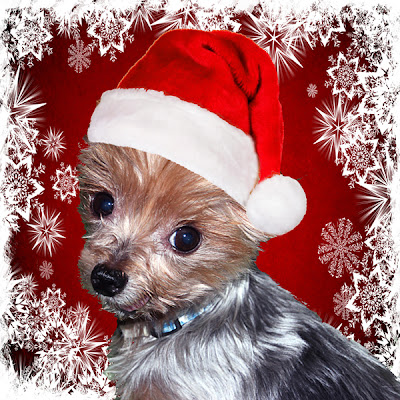 Pogo would not sit and pose with the hat so I Photoshopped it onto his head.  Gosh, he is just so precious!  I had so much fun working on the different designs, and I'm pleased at how my cards and calendars turned out.

Now I need to get dressed and put in a load of laundry.  Maybe even push the vacuum around a bit too.  So, till tomorrow, Y'all have a really nice day.

So very cute! I`m happy you rescued Pogo and take good care of him!

I'm with you ... I can't imagine what little Pogo has been through and I am so happy that he found your big heart to help him heal and let him know that life is good.
The picture is amazing ... I can't imagine that you didn't use it on your card ... it had to have been a very difficult choice :) He is absolutely adorable ...

Fortunately for me I have a guest bed to lay my gifts out on and to wrap on. My husband would never be able to stand sleeping on the sofa and I probably couldn't either though I know I could probably adapt. Aren't you sore when you get up in the morning? I am stiff if I sleep on a motel bed or any bed that my body isn't used to ... such is life when you get a little older :)

I love that you are so organized ... you are inspiring me to get with it. I have almost finished my shopping. What I am behind on is the picture gifts I am creating. That takes time and thought and I seem to be short of both lately. But perseverance is the word for the day ... I have to keep at it, or it won't get done.

So Izzi thinks it is time to go out for a game of Frisbee and, as it is already eleven o'clock, she is probably right. Keep up the good work Edna ... you set a good example for all of us ...

OMG! is he cute in that hat or what? Just adorable. Sorry missed a couple days, had a funeral to attend yesterday and tired me out, catching up work today and then will rest for rest of week except for minor errands and gift wrapping to finish! Got all my cards mailed. So time for a breather...LOL! Have a great day! Hugs, Mat

The photo of Pogo in his Christmas Hat is sooo adorable.

You have been so blessed having Pogo come into your life ...and ours through your photos.

Pogo with the hat is so sweet!

I can't understand and I don't want to, ever, how anyone can hurt an innocent. Anyone who hurts an animal or child should be licked up and given the same treatment they delivered. Okay, it makes me angry too. How blessed little Pogo is to have been rescued and to find you so he'll get all the love he deserves!

I'm almost done with my gift shopping. Now I'm waiting for the boxes to finish coming in. THEN the wrapping starts!

Hope you get back in your bed soon. ;)
Hugs, Nani

Unbelievable what Pogo experienced in his younger life!!!!What happened to him then???
Buit now he has a good and loving home, and he shows his gratitude to you, isn;t he?
Layout from Pogo with his Christmashat is adorable!!
Oh, what a good idea, to occupy your bed with the Christmas stuff LOL.
Keeps you going to clear it quickly, hahaha.
Will get busy now posting on my blog.
So have a happy day
Hugs
Kyra