Oh beautiful sunshine, it's so good to have you back!  It rained all day yesterday and took away all the snow.  We didn't get all that much snow, though any snow is too much snow for me.  A few towns over got six inches of snow so we really were lucky.

I took today off from work, and it felt good not to have to get up early and go out.  I did go out earlier with Pogo, but then we could crawl back into out toasty little bed.  I also traded a day during Thanksgiving week with a girl at work.  I will work her Wednesday, and she will work my Friday.

I have to start thinking about what to cook for Thanksgiving dinner.  Some of the dwarfs will be staying here at home that day, and I always have a dinner for anyone who is home.  I'm leaning towards a turkey dinner with all the trimmings, but first I want to make sure that everyone wants turkey.

Today I am going to make corn chowder.  It's been so many years since I've made it that I won't offer it to anyone until after I taste it.  Funny, I cooked for so many years but got quite spoiled while my brother was living with me.  He was such a great cook and he loved being in charge of the kitchen.  As long as I don't have to bake and frost a cake, the chowder should turn out okay.  lol.

I really have to get serious about making up my Christmas cards and next year's calendar.  Time is flying by, and I really need to have these things already printed by the end of this month and ready for mailing.

I played around a bit last night with a photo of a tiny rosebud, and I rather like it as a piece of photo art.  I think it's the colors and lines that are so pleasing. 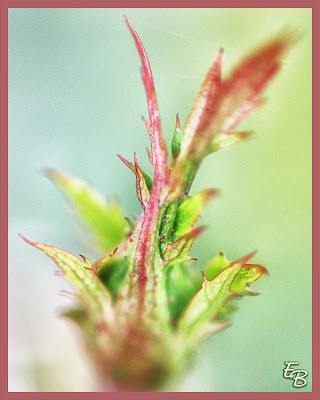 Now I really must get a move on.  I've procrastinated for so long about doing any housework that it's beginning to annoy me now.  But, I've promised myself lots of playtime on the computer once I make a healthy dent in the household chores.  I also want to box up some of the holiday gifts so that I can stack them in a corner until it's time to mail them.  So, till tomorrow, Y'all have a fabulous day.

Your photo art would be perfect for Photo Art Friday ... the prompt this week was lines and the lines in your picture are distinct.

Can you believe we are talking about Thanksgiving dinner already. Time really gets away from us old folk, doesn't it? I often wonder if it isn't because we can't remember what happened yesterday that makes tomorrow seem to come so fast ... hmmmmm

I actually have my Christmas Card ready for the printer. I think I panicked when it turned to November. I have Christmas gifts to make though and little time to do it in if I want to do it right. I love the holidays, but they sure are stressful sometimes.

Corn Chowder ... have never made it, but love it. You would think it would be a staple since my father was a Professor in Horticulture and corn was his thing ... but we always just ate fresh corn on the cob. My mother was a nurse and never had time to can so we didn't have corn to make corn chowder with.

Glad you have sunshine today. We started out with it, but now it is just another grey day ... winter can be a real drag that way. I do love the snow because it is bright and cheery even if it is cold. I guess I had better follow your lead and do some house work ... my SIL is coming to go shopping with me next week so I need to get the dust bunnies up :) Have a great day Edna ...

Great photo with outstanding composition both in form and color. Like the bokeh background...nice capture.

Thanksgiving is the absolute earliest it can be this year, wow. That does mean some extra Christmas shopping days though. :) I have to get working on our cards too. So much time and so little time.

I'm glad the snow went away! I decided I don't even need it to enjoy Christmas. :)