Could We Maybe Have Another Warm Winter?

Good morning.  It's gray and wet outside, but it's warm still.  (low 60's)  I'm not complaining, because I'm hoping we get another winter like last winter.  I only had to fill up with heating fuel five times last winter.  It was a blessing because the cost of fuel is so high.  This winter, if I only have to fill up five times, it will still cost more than $4000 to heat the house.  I don't even want to think what it will cost if we have a "normal" winter.  Groan, groan.

While I'm complaining about the cost of heating oil, I am still thankful that I have a job and am able to heat the house.  There are a lot of folks who do not have jobs or warm houses.

I have a story to share this morning.  There was an article in last night's newspaper about a lovely lady who lives a few towns over from here.  The headline read:  "Involved to the end:  At 105, she casts her last vote."  She was proud of the fact that she always voted, and even though she resides at a nursing facility, she cast her votes by absentee ballot.  She continued to follow the election news as best she could, and on Election day she passed away.  She would have been 106 in February.  God bless her.

I also have an adorable cartoon to share.  I found it on my daughter Deanne's facebook page.  I just couldn't resist copying it to share here.   I had to laugh, because it is so true.  The stores have already put out their Christmas stock, and we haven't even had our Thanksgiving dinner. 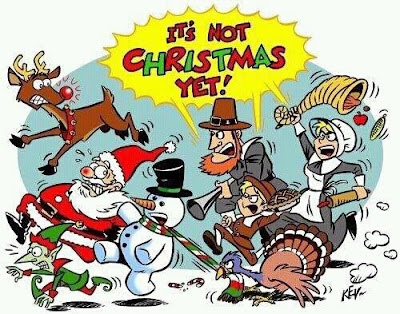 It would be so nice if the stores would do their advertising and stocking a little closer to the actual holidays and seasons.  We aren't going to spend more money just because they have their goods out so early.

I'm watching the Weather Channel, and I surely wish whoever is in charge of the weather forecasters' "on camera" wardrobes would try not to have all the women looking so tarty.  Their dresses are so tight that every bump and wrinkle is glaring.  A few times, a couple of the female forecasters were wearing dresses that were not quite so tight, and they looked really nice.  I know, I know.  If I don't like it, I don't have to watch.  Oh well.

Remember all those super sounding promises that the president made when he visited New Jersey and New York right after Hurricane Sandy?  He said I'm going to cut through all the red tape and get you the help you need right away.  Well, a lot of those folks are still without power and heat, and for some, homes.  They don't have the money to stay at hotels, and they are not getting any aid from the government.  Obviously, it's not coming from anywhere else either.  This is just too shameful.  Makes a person wonder what the big promises were all about.

That said, I'm going to see what's for breakfast.  Pogo has been sitting here, waiting patiently for some food.  My friend who was coming today will be coming Thursday instead.  So, after breakfast, I will see about chasing away a few more dust bunnies.  Who knows, I might even get good at this!  (Oh Lord, please tell me I didn't say that!)

That's it for this morning.  Till tomorrow, Y'all have a fabulous day.

I agree with you about Christmas.......stores here have had Christmas decorations for sale since September and if past years are anything to go by the supermarkets will be selling Hot Cross Buns and Easter Eggs sometime in January.

Wow and I thought our gas heating was expensive. I know a lot of people here have taken out their oil heaters because of the expense and replaced them either with gas or electric.

That's awful to hear about people affected by "Sandy" still needing assistance. Still, I don't think your government is different to any other.....they all promise the world after such disasters and when the crunch comes goes MIA.

There are no dust bunnies safe in your house!
I love the cartoon - that is so true, Christmas seems to be more and more rushed each year and it's all about the profit margin.

It's so true, the stores pull out their holiday decors and such all too long before the actual holiday!
And it''s sad that a lot of folks are still in trouble after Sandy. I don't know if you can blame it all on the president, because the towns councils have their responsibility too and have means to do what is necessary. Whatever the reson is, it's aweful that sending help and restoring all that was demilished must take so long.
Big smile when I saw your cartoon!
Have fun with the dust bunnies.
Hugs
Kyra

Hey, I agree about Christmas and they advertise so much for Halloween then right into Christmas so Thanksgiving gets left out. Now they want to start Black Friday on Thanksgiving Eve...why is it called Black FRIDAY then? Poor employees that will lose another holiday!
The promises????for votes!! Nuff said! Have a terrific day! I came by too early for this post so had to catch up today! Love the cartoon! Hugs, Mat