Good morning.  I'm not sure why I still call today Election Day.  It is in my state and many others.  However, I understand that there are some states that get to vote much earlier.  Why is this?  If voting is to be fair, we should all be voting on the same day.

Another thing -- does my vote really count?  It might, and it might not.  Last night's newspaper ran a whole page article on the electoral equation which is - Population Equals Power.  (per the newspaper)  It shows a map of all the states, and each state is colored either green, red or tan.

The different colors explain how the votes are cast.
The Green states -- Majority winner takes all and electors are legally bound or pledged to vote for a specific candidate.

The Tan states -- Majority winner takes all, but electors are NOT legally bound to vote for a specific candidate.

The Red states -- Two votes go to overall winner of state and remaining votes go to winner of congressional district.   ????  Anyone know why this is???

Washington D.C. -- The paper does not say how these 3 votes go.  Hmmm, I wonder why.

My newspaper is The Patriot Ledger, and all of this information comes from their article.  I'm printing it for those of you who do not know how the voting process works.  I wasn't really too clear until I read this article.  I always used to think that my one little vote was somehow important.  In reality, it isn't all that important.  At least it seems that way.  I think it just sort of gives Congress an idea of which candidate I prefer, but it does not mean that it will count toward electing that person.

The President is not chosen by a nationwide popular vote.  The Electoral College vote totals determine the winner.  It kind of makes you wonder why the TV stations keep posting the peoples' votes all night.  Sort of gives you the idea that the person with the most votes will be your next president.

In the last 200 years, more than 700 proposals have been introduced in Congress to reform or eliminate the Electoral College.  It has been called "archaic" and "ambiguous".  Obviously Congress is quite happy with it just the way it is.

YES, I will go out today and vote.  Who knows?  Someone I vote for just might make it into office.  And yes, I encourage others to vote.  Although I have to say that I am very unhappy with the way this campaign has been run.  I also don't understand why the two parties had to hold conventions this year.  Each party was only offering one candidate, so a vote to pick a candidate was not necessary.

I wonder how many storm victims could have been fed, clothed and put into new housing with the tens of millions of dollars that each party spent on campaign advertising and travel.  It's shameful.

Now that I've chewed your ear off, how about a photo.  Can any of you identify what this is? 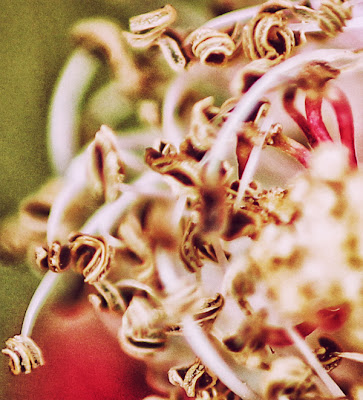 Can you see what looks like curly rings with little gems bezel set into them?  Some of them would make really pretty wedding rings.  Give up?  This is what is left when the rose dies and all the petals have fallen off.  Just a bit of fun I'm having with this macro conversion lens.

Now I think it's time for me to get dressed and take myself to the voting poll.  Well, maybe I'll have another cup of coffee first.  Then I'll go.  Happy voting everyone.  Till tomorrow, Y'all have a wonderful day.

Thanks for trying to explain your voting system but I am still non the wiser.

Do you have a list of candidates and vote for each individual or do you just vote for the party and whatever party gets the most votes, then those candidates become members of the Congress?

I will try and watch it on TV today, maybe I will at least get some idea. They say we should know some results in about 90 minutes.

I will be so glad when this is done. I wish it were based on popular vote instead of the electoral system.
Tomorrow will be a new day!

Your electoral system is very confusing to me. I have wondered about the same things. I think if you had compulsory voting (we do in Australia) the candidates wouldn't make so much fuss and spend so much money trying to win people over to vote as well as voting for them.
We vote for a local member and he/she represents us in parliament. The party which is in govt chooses the Prime Minister...well before the election.

I will be watching your election results closely ..because the outcome will effect us indirectly too:)

For us the electorial system in the US is confusing, certainly if you don't "dive"in to it and understand all the rules.
But don;t worry, also here we can vote and it sometimes seems that the parties who get the most vostes are in government, LOL. But with our system it's almost impossible to govern with only one party, so we are a country of coalition cabinets (government).
Still we don't know for really sure if at the end our votes are as important as they do want us to believe.
And yet we should be happy, that we do get a chance to vote.
It's a right that is fought for and many are still fighting for it.
But... I will never really understand the "game"in politics LOL.
Glad to hear your birthday was a fine day!
On to your next one, I should say!
Hugs
Kyra

I agree with voting on the same day, but I'll add that I voted early for the first time this year and while it felt weird, less crowded early voting was great for a wheelchair! Maybe early voting could be made available for handicapped voters and one attendant in all states? I haven't firmly decided how I felt about it. I get a week to vote in San Marino, even though I abstain. (I'm okay with dual citizenship, but not dual voting)


I agree about the Electoral College; we're all connected enough now that the original reason for it is long over. I think twice in history the candidate who won did not have the majority of the popular vote, but the]at is twice too may times.