Good morning.  To say BRR is an understatement!  It was 7F degrees when I woke up this morning.  (about three hours ago)  It has now warmed up significantly to 17F degrees. Not only is it cold, but we're expecting a ton of snow starting sometime tomorrow and most of Saturday.

Let me tell you about the meals from Sunbasket.  So far, I've received:  spaghetti and meatballs, beef shepherds pie, creamy linguini with peas and pancetta, and broccoli and mac n cheese.  All the meals were good.

This morning, I'm watching Matlock on TV.  It's the first time I've seen an episode where they show Ben Matlock as a young man.  He plays the part of himself as a law student and the part of his father.  Very interesting indeed.

I have another map for you.  This one shows the oddly named towns across the United States.  Do you know anyone living in any of these towns?  Sadly, one state seems to be missing from this map.  The state of Hawaii. 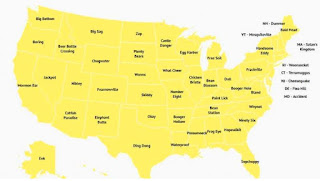 Law & Order will be coming on TV now so I'm off to do some watching.  So, till tomorrow, Y'all stay safe and have a fantabulous day.

My poor friend. it is really cold in your area and then ther is a lot of snow expected. I hope for you it will pass quickly and then get a bit warmer.
The meals of the new company sounded good and when it was tasty anough for you, well, you can stay there. It is nice to get your meals all prepared to your home.
Nothing much happened here, I had a quiet day after a not good night of sleep. Tomorrow will be better.
Stay warm, have fun watching some nice tv,
Hugs
Kyra

Brrr is right. Sadly you are going to get blasted by a big round of snow yet to come.

I had a friend who moved to Jackpot Nevada to work on a tourist amusement feature several years ago and it was a small town from what I heard, Something to do with a Jackpot of gold back in the gold strike days. I will see if I can find any information on it.

I have never heard of Ding Dong Texas but we have a lot of funny names around here, Thank you for sharing this.

I have several calls to make today. Ugh I am n fiot going to move again! Maybe for a change of address but I am not moving out of state again if I can get things fixed here.

Hi Edna, Sorry to hear that you are expecting a lot of snow. I don't think we are expecting any snow for the coming weekend but it is supposed to be in the sub zero degrees tomorrow morning. Oh well. I had to put some air into two of my car tires today as they were a little low due to the colder temps. I would have loved to see that Matlock episode that you mentioned.

I know where Sopchoppy is in Florida, but I don't think I've ever been there. I have been to Cheesequake, in New Jersey, though! There's a state park there as I recall.