Good morning.  Today is sunny and temps should reach as high as seventy degrees.  It would be a super day but Deanne's little dog Sassy is not feeling so good and is at the hospital as I sit here and type.  She's just a tiny little dog and it hurts to see her not feeling well.  Deanne got Sassy when she (Sassy) was just a few weeks old, and now she's around fifteen years young.

This is a photo of Sassy in her fuzzy bed.  God Bless her and watch over her while she heals. 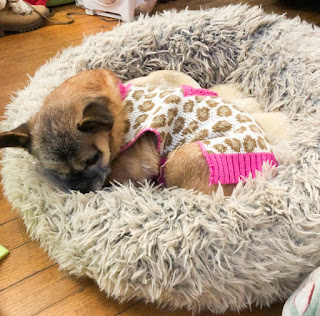 Update.....Sassy is in an oxygen tent at the moment.  She seems to be breathing better but they will be doing some tests.  I'm praying that she will be okay.

Guess what program was on TV last night?  The Ed Sullivan Show!  Wow, I remember how much we looked forward to watching this program every week when I was just a kid.  He always had all the most popular music stars on his program.

I did not make my meat sauce and spaghetti yesterday, so I'll probably make it later this afternoon.  Instead, I made Fettuccini Alfredo.  Yum yum!

Right now, I'm waiting for the mailman to come so that I can give him an envelope and ask if it has enough postage on it.  I mailed a card to a friend who lives in the next town over on August 9th.  The card was returned to me on September 18 with "wrong address" stamped on it.  I wrote "Road" instead of "Avenue."  I called my friend, and put the card in a bigger envelope, re-addressed it, and now I'm sending it again.  I'm just not sure how many stamps to put on it.

Now I'm off to do a bit of blog reading.  So, stay safe and have a fantabulous day.

Hope so that it will be okay with Sassy. But 15 is already quite an age for a little dog. Deanne will be so worried, I know how that feels.

Fettucini is also a good thing for dinner. Lots of pasta are, hahaha.
We have mashed potatoes with sauerkraut mixed together and some sausage. we like it every now and then.

Hope the card arrives well to your friend's address now. It is only horrible how much stampage must go nowadays on a letter!

Have a lovely day, (and I will send a little prayer for Sassy "Upstairs")
Hugs, also to Deanne
Kyra

Prayers for Sassy! What a little sweetie! I always loved the Ed Sullivan show:) Enjoy your day dear friend, it's a rainy one here in my neck of the woods! HUGS!

I didn't know anyone ever aired reruns of the Ed Sullivan Show. Funny! What a sweet photo of Sassy. You'd think the post office could figure out an envelope with "road" instead of "avenue" on it.