Good morning.  Would you believe?  I had quite a bit of this post typed, and whoosh!!  All gone!!  I don't know what button my hand probably touched up against, but it's really not very funny.  You know, I've had this laptop for a few years, and there are still a few keys on it that I have no clue what they are for.

I'm not so good with change or new things that I'm not sure about.  Over the years, I've lost too many things that I could not replace because of computer crashes.  So if I don't know what something does, I don't touch it.  At least, I try not to touch it.

Sometimes my hand will inadvertently touch something on the keyboard and all my work just vanishes into thin air.  Poof!!  There must be an invisible magician living beneath the keyboard, and   every now and then he does one of his magic tricks just to keep me in line.

Most of yesterday's snow is gone, and hopefully the warmer temps today and tomorrow will melt the rest of it.  I'm hoping to be able to start working in the yard and the garden by the middle of April.  A couple days ago, I ordered a couple veggie patches.  These are for planting my tomatoes and maybe a squash or cucumbers.   Here's a picture of a veggie patch. 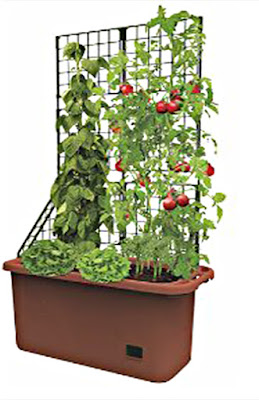 I also ordered two plant towers.  These are going to look really nice with colorful flowers planted on them.  Well, at least that's the plan.  My green thumb left me years ago, but I keep trying to grow pretty plants. 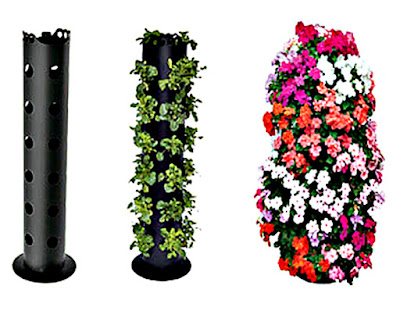 SIL Eddie just called to say that he will be going to Home Depot soon to pick up the new cabinet for the upstairs bathroom.  Yeaaah!  After that we can put my new storage cabinet together and maybe put down new tiles in my bathroom.  I also have some new curtains to put up in the living room.  While we're hanging the new curtains, maybe we'll put new batteries in the wall clock.  It will be nice to look up and see the correct time.  Oh my, so much to do!

Well that's about all my news for this morning.  It's time to open the door so that Pogo can see what's happening outside.  So, till tomorrow, Y'all have a fantabulous day.

Oh Edna,
I just love the towers and vegetable patch. I can just taste those warm tomatoes. I thought of taking my plants back outside but the wind is blowing really hard today. I need to check the weather and see what it is going to do the next few days. I hope that the wind will die down and become a nice soft breeze but I forget that it is March and we usually do have some ferocious winds.

Your to do list is big but I hope that you get it all done and at out of the way so you can move on to other things. Bless Eddie. He is so good to you. I have not seen my SIL since his birthday last September. Joe does not like to leave his house so I have not seen him. Oh I take that back. Laurie and I went over to his and Karyn's house one day and Matt and I stopped by to pick Karyn up and he was walking the dog. He used to come and we would go to the pool or have lunch together.

Jonathan is taking the bus back and forth to work again. His buddy took a new job and is going in the opposite direction now. So Jon is back to leaving an hour earlier and getting home an hour later. We really need to find a place closer to his work. I told Jonathan that it is really hard for me to even go and check the mail these days because it is so hard for me to get my walker up and down the steps. I cannot believe that this place does not have any handicap ramps. All they have is the ones at the parking lot. I told Jonathan that it is against code to not have housing that is handicapped accessible in a place as big as this. For me to go just to check the mail or get to the bus stop I have to climb 4 sets of steps, open the gate and go out. I could go out the back gate and around, but we cannot open the gate from the inside. I have to wait for a car to come thru so the gate opens automatically. I wasn't feeling my best yesterday so I just stayed in and stayed in bed most of the day. I was sleeping by 7 last night.

You know Edna, I have had posts just disappear as well. Sometimes I do nothing more than just go get a cup of coffee and come back and the whole post is gone. It is aggravating and then I get out of Blogger and go back in and it is in my dashboard under drafts. I just found that out by the way. So next time, check your dashboard. Just close out blogger and open it back up. Worth a try anyway.

Ok I am off and running. Oh before I go I wanted to tell you that 3 stores put out all of their products at one time so that is why I had so many to do. I also sent a private message to the one lady and told her that if she cut me from her team that I understood and no hard feelings as I had a lot on my plate right now. I haven't heard back from her as of yet. She is a very nice lady, but it is time for me to pull back. I have 2 full time Ct's so it is gotten to where I have no time for the fun stuff.

Give Pogo snuggles and kisses from me. Cisco would send his regards but at the moment he is burrowed up under 2 pillows a blanket and a comforter....... Lazy dog! LOL.
Love Beth and Cisco.

I had to show your planter to Left Brain. When we get off the road that would be a great way to grow things without having to dig up a garden or have very little space to work with, which will likely be the case in the future.

Hopefully you only had one day of snow and now Old Man winter has gone for good!
Those towers for growing flowers are really nice. ou can easily make them yourself from some plastic pipes you know. Perhpas that would be less expensive.
and I am sure Eddie can fix that for you.
The patch for the veggies looks real nice.
Jan and I did some garden work yesterday, and slowly the garden is going to look a bit organized again.
We are expeting some nice weather the coming days, at least temperature wise, so that should do a great deal for all the buds of leaves and such.
Oh, I know how guilty one can feel, pretending not to hear your pet asking you for something LOL!
But forget it, sometimes we do have to try to learn them something, like letting people sleep during the nights and such, hahaha.
I think he forgives you.Just give him a nice extra cuddle.
No idea what to do today, yesterday I was rather busy, so perhaps a bit easy today?
we'll see about that.
You have a wonderful day,
Hug
Kyra