My cheeks are warm and red, and I apologize.  Yesterday's winter plant was a "Rhododendrum", not a Hydrangea.  I meant Rhododendrum.  It's possible that my fingers are as dyslexic as my brain because I honestly only had one cup of coffee yesterday.  Thanks everyone for helping me out with this.  Here is a photo of a Rhododendrum bud from last summer that has started to open and bloom. 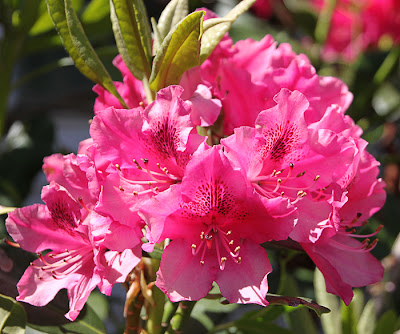 Today's post won't be very long as I have to start getting ready for an appointment in a few minutes.  It's time to see my doctor and get my meds renewed.  While I am there I will have him check a spot on my back where a tick was several weeks ago.  Although my boss removed the tick, the spot is still a bit red.

Yesterday, flowers weren't the only thing that I got mixed up.  While I was washing my hair in the shower, I grabbed what I thought was the bottle of conditioner.  Turned out it was a bottle of Cucumber Body Wash - made up of lotion and oils.  This stuff is really nice on your skin, but oh my, what a mess it makes on your hair.  I re-shampooed my hair, but I will need to do it again later this afternoon.

All in all, yesterday was not my best day.  I tried for about 45 minutes to make my "smart phone" do something, anything.  But it would not.  It's very touchy, and if I looked at it the wrong way, it went to places I never dreamed would be on a phone.  It took me most of that time to find out where my "Angry Bird" game went so that I could play it.  Once I found it, it would only let me shoot one little bird and then it would shut down.  What kind of game is that?

I tried several tmes to make the phone shut off, but it just wouldn't.  Several hours later, I did something (I don't really know what) and got it to shut off.  Maybe later I will try to see how it works again.   I just may have to stick with my "dumb" phone. The only time that phone doesn't work is if the battery dies.

Now it's time for me to get ready for my appointment.  Till tomorrow, Y'all have a wonderful day.

I know hydrangeas bloom in summer, around my birthday, but I've never been an "out in winter" person so I had no idea if they bloomed in winter too. Learn something new every day. Thanks, Edna!

The rhododendron blooms sure are pretty! I'll need to do some flower research!

Hope everything goes well with your appointment.