Good morning.  I am feeling much better this morning.  I just needed a good night's sleep.  It looks like the sun might be trying to shine, and it's not raining.  The temperature is at 44F degrees and might even get a few degrees warmer later today.

Well, yesterday was quite the day, even thought I only wanted to sleep all day.  That didn't happen!  Early in the morning, I had to shut off the heat in the whole house so that none of the pipes would burst.  I tried once again to reach our regular furnace service man to no avail, so I called a new company one town over.

This fellow said he would be out in about an a hour or less.  And he was!  I now have a new burner service man.  Not only did he fix the problem, but he said that a large part of the burner was never cleaned out and really should be as soon as possible.  He will be back tomorrow to do just that.  Before he starts work, I'll take a photo to show the other company that I had paid to do the cleaning last month.

Many years ago, a baby had to be put into the system to be given up for adoption.  Back then, fathers had no legal choices if they were not married to the baby's mother.  You just hoped that the baby would be given a good home with a loving family to raise it.  Ever since, I have hoped and wished that someday while I was still here on earth that I might find that child (no, not mine) and at least know that it had a good life.

Well yesterday my phone rang and a young man introduced himself to me.  Folks, dreams do come true.  I have been walking on clouds since that phone call.  That baby grew up into a fine young man who is now almost thirty nine years old.  He had a good family and is now looking up his history.  I was going to post his photo here, but I forgot to ask him if it was okay, so the photo and name will have to wait for now.

We had a really long chat on the phone, and I may get to meet him this coming Saturday afternoon.  Oh my goodness, I am excited!  Today I will be putting a lot of photos on a thumb drive to give to him.  I also want to look through a lot of my old photos because somewhere I have a photo of him when he was just a baby, which I will copy and give to him.

So you see, I will be floating until Saturday afternoon gets here.  I'm on pins and needles too.  I hope to have more to share here this weekend.

I found a new kind of greeting card to share with you.  I found this in a "Signals" catalogue.  It's called the "Endless Singing Christmas Joke Card"  Once it starts playing music, it just keeps getting louder for up to three hours.  If the recipient gets mad enough to tear up the card, it scatters glitter all over them. 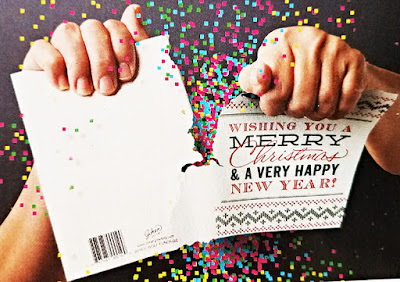 Well, that's it for my chatter this morning.  I have a lot to do today.  I also know that I have been remiss in posting quick pages, but I will remedy that shortly.    So, till tomorrow, Y'all have a really awesome day.

Hi Edna,
Love your blog and yes wishes do come true... What a great wish for you. I am so very very happy for you.

Love the card too. I would think that would be a perfect card for someone that has a great sense of humor. They would have to have one lol.

I hope that you get your heat taken care of. This is just aggravating for you. Especially paying for a service that didn't get done properly.... I will talk with you soon. Have a great day... Hugs. Cisco sends his best of doggy kisses to you and Pogo... Love, Beth and Cisco... xx

Im so glad your feeling better today and that you managed to find someone to sort your heating out you will need it now its getting colder,
So happy for you finding out about the baby after all these years.
dont think I want any of those cards would drive me mad lol x take care x