The QP Link Has Been Fixed

Good morning.  Wow, what a week it has been.  In the last six or seven days, I only had about sixteen hours of heat.  While I had the heat, it really did feel wicked good.  However, the burner man that I've been using for so many years seems to unfix something every time he comes out to fix something.  In the past week, he was here twice, both times he left me with no heat.

Last Thursday when I called him, I was hung up on twice, got four no answers, and they knew that I had no heat.  Needless to say, I now have a new company.  I called these new folks last Friday and they said they could come out today.  Their repair man was here early this morning, and in less than an hour he had my heat working.

(p.s.)  The old company told me on Saturday that they would not be coming back to fix my "no heat" problem until today.  So far, they have not called or shown up.  Some company, huh?)  If they show up I'll tell them that they are no longer needed for any services.

I showed him the different things that the other burner man had said were the problem, and was amazed at the new information that this new fellow told me.  I have to replace my oil tank.  The old burner man told me that I should wait until summer to have it done, that that would be the best time.  This new guy tells me that technically I should not be getting oil deliveries until the new tank is installed.  What if the weight of the oil broke the tank open?  Hmmmm?  Oh gosh, I don't even want to think about what would happen then.

I've already gotten a price from the new company for the installation of the new tank and the removal of the old tanks (there are two of them).  Now I'm just waiting for a call from the guy who will be taking out the old tanks and putting in the new tank so that I'll know when they are coming.

I have to say that it will feel good to try to sleep and not be wearing a scarf, a sweat suit and a flannel robe to bed, while climbing under two really thick blankets.  Pogo will be very glad too that I won't be wrapping him up like a snowball and tucking him under the blankets at bedtime to keep him warm.

One problem down and one more to go.  Today, someone is supposed to be coming to fix my car's remote starter.  They were supposed to be here last Friday, but it rained so they rescheduled for today.  I'm hoping that this appointment goes as well as my burner appointment.

I had a comment the other day that the link for the quick page was not working.  I immediately got a new link and downloaded the kit to make sure that the new link was working.  So if anyone had a problem with the last quick page, please try to download it now.  It should be working fine.  (It is posted on Friday, January 12.)

The phone just rang and it was the fellow who is coming out to fix the remote starter on my car.  He says he is on the way and should be here soon.  Well, that is good news, I hope.

Before I take my leave, I want to share an adorable sign that I borrowed from the web.  My daughter Audrey is going to be getting chickens next Spring.  This giggle made me think of her. 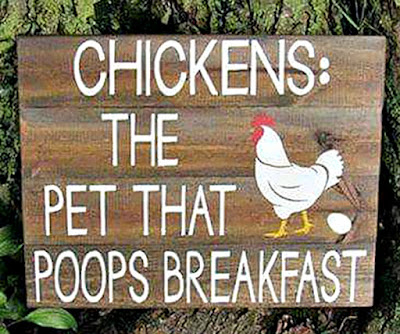 On that note, I need to get busy here.  There is so much to do today.  I've done very little lately because it has been too cold.  Now that the heat is coming up, I have lots to do.  So, till tomorrow, Y'all have an awesome day.

Edna, if you did not have bad luck, seems you would have no luck at all. Very hard to get good help hat is reliable. Hang in, it will get better.

Im so glad your getting the heating sorted out at last will be good for you to feel warm again, love the chicken picture I had to smile. hope the car remote gets sorted ok as well look after yourself x

Oh my God, you had no luck this week. Glad you finally found another company that hopefully now and in the future will give you a better service.
I am just hoping, because you are a new customer, that the guy that came fixing the heat, isn;t telling fairy stories about having to change the tanks!
But if it is necessary then it is good you found a company that works quicker!
Cross fingers here that soon all will be done with.
Hugs
Kyra