Good morning.  The sun is shining and the temperature is already in the 60's.  It looks like we will get up to around 72 degrees later today.  Woo Hoo!  We'll have to spend some time out on the porch enjoying this gorgeous day because tomorrow is supposed to be rainy and only in the low 50's.

Gosh, I'm thinking that Pogo isn't feeling so good this morning.  He went out in to the house to bark at Joe for his turkey treat, but when Joe got it Pogo refused to eat it.  Instead, he came running back out here to our place.  Right now, he's curled up inside his big fuzzy blanket.  I sure hope he did not catch a bug or a virus while we were out yesterday.

Yesterday, the sun came out, and Pogo and I went out to do some errands.  We ended up at Ocean State Job Lot, where we took our time going up and down all the aisles.  I decided not to buy a carpet for the porch yet, but I did pick up a few other things.  I now have two small garden shovels, (hand tools) a new copper knife and a new square copper fry pan.  I also stocked up on more birdseed.

When Pogo and I got home, Joe vacuumed the inside of my car and washed all the windows.  My car looks new now!  Wow, can you believe I've had this car almost four years?   She's just as pretty now as she was the day I first got her!

You know, since I turned the heat off, I've been shivering cold every day and every night.  Yesterday, while wearing sweat pants and a sweat shirt under my flannel bathrobe, I tried to take a nap.  Under all this warm stuff, I still couldn't shake the chills, so I finally got up and turned the heat back on.  In a few hours, I stopped shivering.  Last night I was finally able to be warm enough to sleep comfortably.

This is a strange year for weather.  It's almost June and I have the heat on to keep warm.  Then again, it could be due to the fact that I'm older and it takes me quite a while to get over being sick.  My body's resistance to things is down.  Maybe all of this makes me not able to handle the cooler temps.

Friday, I meant to post the last set of the recipe pages, but I forgot.  So I'll post them today.  I hope a lot of you were able to use them. 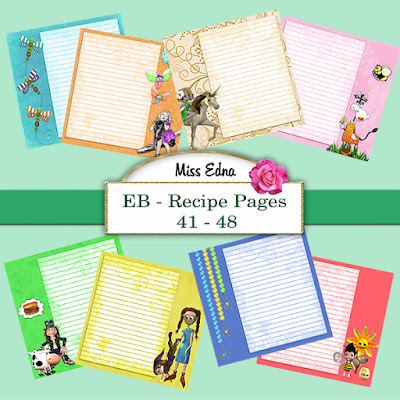 I had thought that Pogo and I might go out shopping again today, but I don't know if he's up to it.  Instead, I think I'll just take him out in the yard for a bit.  Hopefully, he'll feel better later and we can go out another day.

Well, now I'm going to catch up on a bit of blog reading.  So, till tomorrow, Y'all have a fantabulous day.

Thank you for raking the time to drop by for a visit. Enjoy your daily activities.

Sorry I haven't left a comment in a while, there are definitely times where a few movements to open a page and read is much easier than all the strokes to type!

The weather's been crazy here too! Hot days and AC one week and the heat on the next. And rain in May; enough that I'm sure they'll start working in that arc in the Maumee River again. Maybe not that bad but rain and/or thunder every day now.

I loved that pic of Jazzy Friday. She has become a beautiful young woman! I know what you mean from my nieces; I miss those sweet little girls, but I wouldn't trade the women they are for anything.

I'm going to keep read inbox,but also keep trying to comment and blog more often! Hope Pogo is back to %100 himself after a good day of rest!

Poor Pogo, what might he suffering? Hopefully just a short unpleasance, that will go over quickly.
Oh, I know what you mean about getting warm and staying warm.
Here the weather has been so strange too, some days it warms up real nice, then nights temps are really cool for one or two days, then next hights it stays around 12-14C, so you cannot predicit it.
And then it is nice to heat the house a bit, just to make it agreable and then you can turn it on low again. We do that at times in the evening.
And perhaps it has to do with your resistance being low at the mment. Best is to try to keep warm, even if you have to turn the heat on. Your health is precious!
Great you did some shopping and found a few lovely things.
Take care dear,
Hug
Kyra