Good morning.  Tis gray outside my door, and I think we have a few days of damp and gray coming up now.  At least that's what the weather forecast says.  Ah well, my new pots and plants are on the porch so I can still get them potted, or at least try to.

I already started the potting, but had to stop to get rocks to put in the bottom of the new pots.  I have a bag with some rocks, but will need to get some more.  Daughter Deanne says that she will pick some up for me at the Dollar Store after work today.

I found out why I had such a bad case of the chills yesterday.  It seems that during the night before, the heating pipes in the house were rattling and keeping Joe awake, so he went downstairs and shut off the heat from the main source.  The only heat that was on was mine, so that meant that now I had no heat at all.  Once my place cooled down, I got the chills.  I did not learn of this until after three in the afternoon when Joe got home from work, and I had him put the heat back on.  (In my place)

This morning I had the heating fuel tank filled again.  Most likely, this will be all we need until late next Fall.  Pogo was out on the porch, barking ferociously at the delivery man.  My little guy takes his job of protecting me and the house quite seriously.

Here's a picture that I borrowed from the web that I found quite interesting.  Mainly, because of it's name.  (DeeDee - actually stands for DD)   I did not even realize that there were dwarf planets. 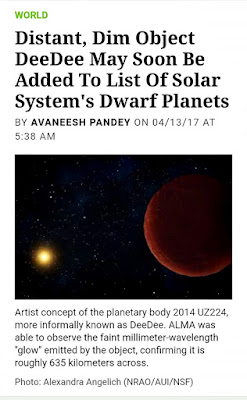 I did look it up on Google and found a lot of really interesting information.  There's even talk of another planet.  They call it planet #9 and say that it is much larger than earth.  If you have any interest in the sky and what is up there, do look this up.  It's amazing to think that there might even just be another world out there somewhere.

Pogo seems to be on strike against doggie food.  No matter what I give him, he won't eat it.  He's decided that he'll eat most anything that might come off my plate though, as long as it is not doggie food. This is new because he doesn't really like most people food, just hamburger and steak.  Ah well, considering the price of the dog food that I've been buying for him, I might just have to go back to cooking him hamburgers.

Now it's time for me to wash a few dishes and find some mischief to get into.  So, till Sunday, Y'all have an awesome weekend.

Hi Edna,
Interesting facts about the new planet. I have heard that they are discovering more and more every day. There is even this talk of Planet X that is approaching earth that only comes around every 3,000 years or so. Also that is along with a lot of conspiracy theories that they are trying to hide it with the chem trails. Why hide something so interesting? Unless of course it is on the course to collide with earth hmmm. I am of the notion that if it happens it happens and so be it.

I put Baby up so that Cisco cannot tear him apart. Well he moped around for several days and I couldn't stand it so last night I gave Baby back to him and oh he was so excited. He tucked him in as usual. He loves Chicki but there is just something about Baby. Chicki has lost a foot and a squeaker. He gets really possessive of his babies. Jonathan tried to play with him with Chicki day before yesterday and he wasn't having it. He took Chicki and ran and hid. This apartment is so small that there are not many hiding places but he thinks that we can't see him. He is so funny. Of course he slept with me last night with Baby, Chicki, 2 tennis balls, and one of those forever bones. By the time I move all of his toys and him he thinks it is play time.

Edna you might as well just stop buying the expensive dog food and make Pogo his hamburgers and steak treats. Do you think that I started that people food by letting him have bits and bites of my food in Florida? At least he is eating and your sharing so he will at least get some food in that tiny belly.

I think that I need to lay down again. I keep yawning and my coffee is not helping at all. So Have an awesome day and I will catch up with you on Sunday... Hugs to you and Pogo from Cisco and Beth...

Gosh, now I understand too why you had the chills. The weather here also isn;t yet good enough to be without heating. We'll see how long that will last, hopefully we will have a good and long warm summer, otherwise the yearly energy bill could be a nasty surprise(depending on your use you get some money back(or lower monthly bill) or you have to pay extra)
All scientist are convinced there should be other planets somewhat like our earth somewhere in the universe and I am sure of it too There is only explored such a tiny part of the whole universe, it would be strange to think we are the only planet that has life on it.
Oh boy, Pogo has his moods again? It is difficult to know what he really likes to eat isn;t it? But at his age, he can be a bit picky, hmmmm?
Good, now time for me to post on my blog.
Have a wonderful day,
Hug
Kyra