It's Still Too Soon To Put Our Winter Clothes Away

Good morning.  Goodness, in less than a month it will be summer and I'm still wearing my flannel bathrobe to keep warm.  Brrrr!  When do the warm Spring temps get here?  I mean, to stay?  Last week we had three days with temps in the 90's.  Now we're struggling to get into the 60's.

Well, yesterday was another of those "what in the world did I do all day?" days.  I seem to have a lot of them now.  Ah well, as long as Pogo doesn't mind, I guess it's okay.  Today though, we'll do something.  Later this morning, we are going to the bank so that some bills can get paid.  Then we're going to the hardware store to get some plant soil and maybe some metal garden tools.

Dwarf Mike said that he would go with us.  Maybe we'll treat ourselves to lunch at Wendy's when we're done.  This will make Pogo happy because he's been eating doggie food for the last couple of days.  Actually, if I got a pizza and brought it home, that would probably make him even happier.  He gets all excited when he sees a pizza box, and can't wait to get at the pizza.  He only eats a little it, but it does make him happy.

I have another photo to share that I took a few days ago.  This one was taken near the shed, looking out at the driveway.  It's such a warm and pretty shot. 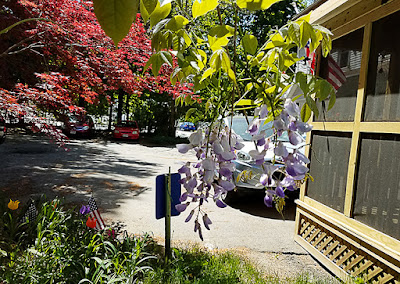 Today the sun is playing hide and seek with us.  It rained during the night and it's still damp and raw outside.  Ooooh, maybe I spoke too soon.  The sun just came out full and bright.  Maybe it will warm things up a bit before we go out to do our errands.   Let's hope so.

There's really not much news around here lately.  I'm waiting for a delivery from Amazon.  I ordered two pair of slippers for myself.  DIL Janet gave me a pair for Christmas and I love them.  I wear them outdoors as well as indoors.  They are Dearfoams and they are very comfortable.

Well, I guess it's time for me to find some new mischief to get into.  So, till tomorrow, Y'all have a fantabulous day.

Edna,
Dear Foam slippers are awesome. I had a pair given to me for Mother's Day a few years ago but have never been able to find the same kind again. I will go to Amazon and check it out. We were in the 60's for 2 days and I am not sure about yesterday but we loved it.

It makes my heart smile as I read that Pogo gets excited about the pizza. Aww how sweet. Now you know that after this treat your going to go into battle again getting him to eat his dog food. Hee Hee!

Cisco loves his Blue Buffalo and so far so good. He guards his bowl as he is eating it. Someone walked past the patio and he seen them and growled. It was so funny. Usually he never looks up when eating. He seems more satisfied too and less hungry.

A gorgeous photo that you posted. Your home is so lovely. I hope that you have a good outing and that you get the tools that you need. Have a gorgeous and fantastic day. Hugs, Beth and the gang!

You have such lovely plantings and trust that the nice weather will come soon. It's 92 degrees at 9:00 here in Mesa. Gracie just agreed to come in off the deck. She loves being out there but it's hot for me and she has all that fur! George is the smart one, he comes in earlier than she does and takes his nap. Now she's all hot and cranky....this is where I usually head out on errands or shopping to get away from Miss Crabby Pants.

Oh, you didn;t go to the hardware store yet. It will be today. never mind, as long as you find the things you need.
Nice that Mike will go with you. And yes, ggood idea to have lunch after the shopping. It makes a niice change. Be careful with the pizza for Pogo.It is just what Beth says: after he had that it will be hard to get him on doggie food again LOL!
I still wear my fleece lounge wear in the evening and we even sometimes put on the central heating for an hour or so, just to warm it through a bit and then it stays okay for a long time.
It's just not warm enough for longer time to warm the house. Which is anyway a bit difficult, cause we have a cool house in general.
Sometimes nice, but sometimes the other way.
The photo's byy the way were lovely!
So nice that everything is starting to bloom now. It is food for the soul, really.
Hug
Kyra