How Healthy Is Airplane Travel?

Good morning.  Wow, I think today the temperature is going to hit 60.  The nights still drop down to the very low 40's so it's not quite feeling like Spring yet.  The sun is shining so it looks like it might be really nice today.

Do any of you get the Reader's Digest magazine?  It's a little thinner than it used to be, but it is still a very interesting magazine.  The April issue had an article that could be very useful for folks who travel by airplane.  It listed eight things that you should never do on a plane.  I found these three most interesting.

Close The Air Vent.  Doctors recommend opening the overhead air vent and setting it on low to medium in order to keep germs from lingering in your personal space.

Order Tea Or Coffee.  The water used to brew hot drinks comes from an onboard tank, and it's not the most pristine part of the plane.  A report found that 12 percent of airplanes carried water that tested positive for coliform, an indicator that other harmful bacteria could be present.  (I drink bottled water)

Touch That Tray.  Your seat-back tray is by far the most bacteria loaded surface on the plane.  A study found that trays harbor an average of 2,155 colony forming units of bacteria per square inch, compared to 265 units on the lavatory flush button.  Keep your food on your plate.

Ouch!  That part about the tray was something I never thought about!  I don't put food on that tray anyway, but now I'll be even more careful.

The sun has gone behind some clouds so I guess this is going to be another lazy day for me.  I found this adorable cartoon on the web, and I thought "Gosh!  This is me!"  haha 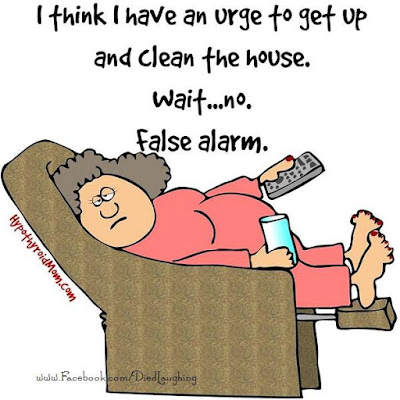 The mailman just brought the mail and the new issue of Reader's Digest.  Guess what I'll be doing today?  On that happy note, I'll take my leave now.  So till tomorrow, Y'all have an awesome day.

We are also welcoming the cooler nights here in Southeast Texas (Gulf coast). Buuuuuuttttttttt we do hit the 80's mark by noon. We are so ready when winter get here like you are for spring and summer. You can easily keep warm with our weather here but trying to keep cool is terrible. You're going from hot(outside) to cold (inside). That not good for someone like me with sinusitis. But like you, growing up in North Louisiana was dreary cold sometimes. All it had to do was rain and get cold and all the trees, etc. turn to icicles. So I just got comfortable with semi-tropical climates here on the Gulf Coast. By the way, I always read the reader's digest when I was younger. Honestly, I didn't know it was still being published. I will have to check into that and start reading it again. It is very good information there. I will leave and give you an A+ on your motivation with life itself. I know I've never met you but reading your blogs make me seem like I know you. You have become part of my daily motivation. When I reach your age, I want to be like you. I have a lot of confidence in my heavenly father and through you he show me that no matter where you are in life someone out there can still motivate you in your daily life. You might be down but you lift yourself up and keep on stepping. You turn those stumbling blocks into stepping stones. Keep up the good work Ms. Edna. You are making a difference in my life being 66 and crippled with osteoarthritis. I garden, vegetable garden in my backyard and beautiful landscaping with pretty plants in my front yard. I did it myself with a little help from my son. Have a very blessed day and hug Pogo for me.

Sometimes better not to thnk about all the germs and bacteries that are around you. it makes you crazy.
But it never harms to be a bit careful, of course.
I love that cartoon, very much for me too these days, hahahaha.
This evening Jan and I will put some old stuff and not being used stuff and such on the sidewalk and it will be picked up tomorrow.
It isn't all too much but every little counts in making space and getting rid of not used and broken or unwanted things.
And now I will look up an easy recipe for some pumpkin we will have for dinner with some chichen and boiled potatoes and then perhaps I can prepare some for dinner in advance and then I think will sit for a moment in the sun. We have to cherish and enjoy it as long as it is there!
Have a wonderful day,
Hugs
Kyra

I was out and about over the weekend and then Monday Karyn and I were out again and by Monday night I was sick with a stomach bug. Have spent most of the days and nights running for the bathroom. On top of that I have caught Jon's cold. So I have read your blogs, just no energy to really comment. I wish I had read your Reader's Digest post before I got sick. There is really no telling where I caught this bug. But since I am the only one it has hit I have to wonder if I didn't pick up a bit of food poisoning!

I was really shocked about the tray on the plane. I would have thought that they would use some kind of cleaner to wipe them down, but I guess not. I find that it is just a bit too inconvenient for people to actually do their jobs these days. Oh and no more coffee or tea for me! Not that I do anyway. I usually buy a large water before I board.

It is so hot here Edna and muggy. I have the a/c down to 73 and it is still not really cool. We hit the mid 90's last week. Before long it will be in the 100's plus. It seems that our summer heat is getting to us faster and faster every year and not really a winter at all. We had one freeze last year and one the year before it that only lasted over night and neither could be classified as a real freeze.