It's Time To Start Planning For Florida

Good morning.  I'm up early this morning.  It's not daylight yet, but we've already had our breakfast.  Well, at least I did.  Pogo isn't touching his so I'll take a moment here to wrap it and put it in the refrigerator for later.

I'm back.  Some mornings he wants his food right away, and others he waits till later in the morning.  No biggie.  That's what the fridge is for.  To keep the food fresh till His Majesty is ready for it.

On Friday, Joe and I did our grocery shopping and I picked up six huge bags of dog and cat food, and some assorted packages of treats.  Yesterday morning, we went to our local Ace Hardware store and dropped off all the pet food and treats.  In a couple of days, all the donations will be delivered to local animal shelters.

Yesterday, well I can't think of much of anything that I accomplished yesterday.  I was busy, just not doing anything spectacular.  Well, one thing that I did was to go outside and take a photo of our Christmas rose.  This gorgeous little pink blossom is growing on my pink rose tree. 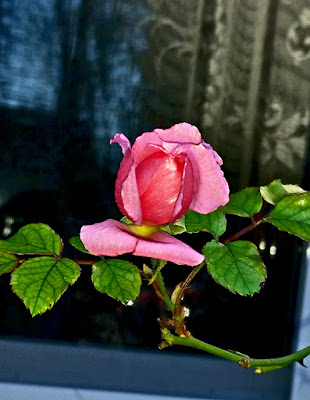 I think the HDR setting on my cell phone is turned on because the rose is actually a bit lighter than it shows here.  I'll have to check my phone.  But isn't it a pretty gift?  There's also another tiny bud on another branch.

I found another interesting crochet pattern on the web that I'd like to try once I've finished the projects that I'm working on.  This one is a prayer shawl.  Sorry the picture isn't all that great, but you can see how pretty it is. 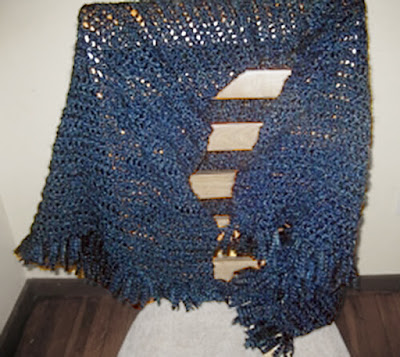 I've set up my Christmas Angel, and placed some of the gifts around it.  Later this morning, I'll finish putting the rest of the things with it, and then I'll take some photos.  DIL Janet bought a cute new Christmas outfit for Pogo.  I'll try it on him later and take some photos of that too.

My next big project is to start looking up flights for our upcoming trip to Florida.  Jet Blue had some fabulous fares a few days ago, but they were only good if you booked during that two day period.  Not knowing who was traveling when with me and Pogo, I could not take advantage of the super low prices.  I'll have to get definite time schedules from Joe and Janet.

Today I want to wrap a few last gifts, then Pogo and I can just settle back and wait for Santa Claus to get here.   Oooh, I forgot to mention, but yesterday I did pick up three presents for next Christmas and one birthday present.  These have all been put away in my gift drawer.

Well that's about all my news for this morning.  Before I go, I do have another Christmas QP for you.  This one features an old time Father Christmas and a few of Nature's little ones who waiting for his arrival. 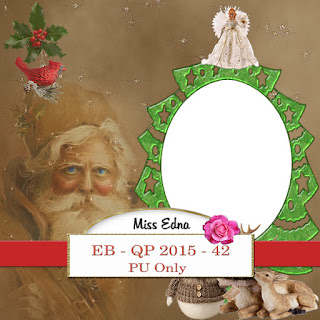 Now I'm going to head for the kitchen and make a fresh cup of coffee.  So, till tomorrow, Y'all have a fantabulous day.

This December has been better than last December in that I’m not struggling alone, but it makes me farther behind on everything in that I’ve had nurses and therapists and social workers and wheelchair vendor reps over all the time. It’s cut into my computer time. First (or at least second) world problems, huh?

I loved, loved, loved the picture of Ali you posted on the 13th, in the pink with white polka dots! Her face has already become so expressive, she’s just beautiful! My first exclamation when I saw the picture was “she’s a doll!” My baby doll best friend when I was little was Drowsy, who wore a pink sleeper with white polka dots. Ali made me feel so warm and fuzzy in that picture.

I envy being able to start next year’s gift drawer already. Of course, with having started drawing names at my Dad’s place I really don’t have lots of names on my list. We have a minimum, but no maximum. It means spend as much as you’d like, but don’t expect to have more than the minimum spent on you. It’s all about the thought. The college kid drew my name, so I’m definitely expecting to unwrap a thoughtful gift over expensive. I’m also going to brace myself for the tears she’s owed me since the book I did when she turned 18. LOL I’ve had to pull the reigns in on myself because my aunt is so much fun to shop for and with the same budget and fewer names, well…

What a sweet Christmas rose! Warmer than usual helps the tree bloom, right? Personally, I don’t mind the unseasonal weather in this part of the country, although a friend who was freaking out about 38 degree temps in Arizona wanted the regular weather there back a few days ago. Although the climate issues represented concern me, it still brings back happy memories about a balmy Christmas eve in the early 80s.

Now I need to make another cup of coffee and get the big haul for the post office tomorrow ready!

thank you so much for the beautiful qp!

I am almost ready now for Christmas. Got all my packages mailed. baking and candy making done. just a few more gifts to wrap. my mom always gives me money to by her fur grand-daughter a few treats, but I get to wrap them - LOL.

that rose is beautiful! i'm still waiting for my tiger aloe cactus to finish blooming. it's little flower stem is quite long, and I can't wait to see what it will look like when it opens!

Some plants and bushes are all mixed up in our garden too. It is because of the much warmer December month than usual. In a way we have to be concerned about it, but other part of me isn;t regretting it. Very dual feeling.
I am about all prepared for Christmas, just on the day itself I will have to do minor things for our dinner, whis=ch I don;t mind. It helps to pass the time that Jan is away.
And I am looking forward to see a lot of Christmas shows!
Pity you cannot book already your flight if it is such a good price. But there will be other offers later, I'm sure.
Oh, I did have a lazy day yesterday and it was marvellous LOL.
May be today it will be kind of the same, weather isn;t all too nice, at the moment we have rain and they are expecting hard to stormy winds later. It will last only today and may be a bit tomorroww but then it will slow down again and temperatures will be 10-11C at the lowest this week.
Have a lovely day,
Hug
Kyra

It seems hard to believe it's almost the end of the year. I lose track when the weather is so warm down here. Our kids and grandkids will arrive tomorrow, so it's going to be hard to keep up with the blog once the tornado hits. So if you don't hear from me for a while, have a good one and enjoy the holidays.