Have You Had Your Flu Shot?

Good morning.  Wow, what a difference in the temps this morning.  It's 51F degrees and headed toward a high of 57F degrees.  Of course, it does come with lots of rain.  It's only misting at the moment, but give it time.  There is a breeze however, and my flag is waving happily over the front porch.

I was just reading an article in our newspaper about the flu here in Massachusetts, where the health experts are saying that it is surging.  Last year was the worst flu season since 2009, and it contributed to the death of an estimated 79,400 people nationwide.

What can we do about this?  Get your Flu shot!  It takes two weeks for the shot to take effect.  If you have not had your shot yet, please do so now because we still have a way to go in this year's flu season.  Call your doctor if you start having flu symptoms.  Stay home from school and/or work to keep from spreading the flu to others.

Another article that caught my eye is about a man shooting another man over the purchase/sale of a car.  They were arguing over the selling price of the car, and one man pulled out a gun and shot the other guy.  What caught my interest was the fact that the shooter did not have a license to be carrying the gun.

This is important because the "anti-gun" folks would have you think that all the gun killings are done by licensed gun owners.  This is not the case.  I do believe that a bit of research would find that most killings are done by unlicensed people who have illegal weapons.   Instead of threatening us with more gun laws, why not just enforce the laws that are already on the books?

Today I have another angel coloring page for you.  This is also from Dover, where you can get your own coloring pages for free by signing up for them.  DoverPublications.com.  This is the Guardian Angel of Cats.  Enjoy. 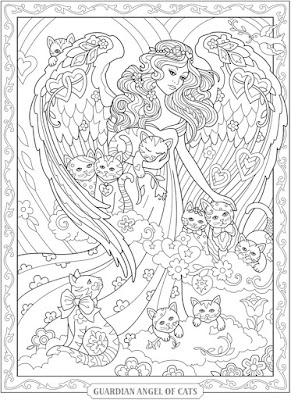 I did not get to go out yesterday after all.  Instead, Pogo and I had a lazy day (what else is new?) and finished it off with a take out order of Chines food for our supper.  As usual, I ordered extra Pork Lo Mein because this is our favorite and we like to have it the next day too.  Which we did.  For breakfast this morning.  Yum, yum.

Now I'm off to do a bit of blog reading before looking for some mischief to get into today.  So, till tomorrow, Y'all have a fantabulous day.

I will be coloring the guardian angel of cats this weekend! Thanks for sharing....coloring is so relaxing for me and it keeps me from munching! Happy Thursday! Annster's Domain

Marc and I both had our flu shots long ago as we do every year. Small thing but hopefully will keep us from getting the flu. I agree on your gun thoughts. We just purchased one last year and pray we don't have to use it ever, but we thought we needed protections. There is SO much hate these days that it hurts my heart. The kids are watching the adults and lots of times they are not setting a very good example. I'll move on now and say "have a good day", it is cold and windy here after a really heavy rain overnight. Sending HUGS and PRAYERS your way!

we had our flu shots! I nearly died December 31, 2013 so I never miss it these days. But I am a bit wary of all those shots they expect the elderly to get. WHy don't young people get a gripe and vaccinate their children? I read a social media where this women claimed her triplets got their flue shot and by 3 that afternoon they had autism!B A L O N E Y ! First of all, autism can not be properly diagnosed until age 5. I am hoping that is what my daughters two friends and our one relative told us. Having children with autism, I would guess they are correct. MIni rant for me over.

I gave you kudos at my social media page. Been lazy about blogging and I love it. I am not a liar so I needed a push and you pushed me! Thank you. If I fail at blogging each day it is on me. But if I succeed it is more history for the grands and great grands.

We have guns too, and I get tire of the lies we hear. The police officer murdered in that California bar shooting was actually killed by friendly fire so the mainstream media needs to go back to practicing journalism and not lying for the likes of George Soros.

I don't know if you watched the 20/20 special about the televangelist Bakkers? That Ted Koppel, wow, he was an awesome journalist! But frightening how times have changed even from 25 years ago.

We better all be praying. My friend Joyce in Louisana says this attack on the unborn is just another murderous rampage minus guns. I am stunned and sickened by the political people in New York. Horrific.

We have snow and it is about 25 with a high of 26. Woo Hoo! Grateful God sent some sun to shine but it is windy and cold. The one pup was like, uhmmm...no! I was, yes sir and you will get loved and cuddled when you return. Hee Hee Hee!

It is quiet here. I scolded Leo. Today is not a day to chase rabbits because that just proves you are both being dumb! Stay indoors where you are loved and cared for.

This is why I don't do much blog hopping. I am too busy writing novellas to each blogger I can visit. LOL!

I love you my friend. Stay warm and happy. Thank you.