We're having a fantastic streak of great weather.  The sun is shining this morning, and the weatherman promises us a couple more days of warm temperatures.  No complaints from me.  I love it!!

Yesterday, I worked an extra long shift, so I was not up to wrapping last night.  I was just going to play on my laptop, but some prints that I had ordered came in the mail.  So of course I brought out the frames that I had purchased and framed a few of the prints.  For some reason, my least favorite print seems to be a favorite with everyone else.  Go figure!

Now I have to figure out how to ship them.  Because of the glass, I think I will let the local shipping store do the wrapping/packing for me.  They know how to do it to keep the glass from breaking.

After supper, I tried my hand at making snow in Photoshop.  The Queen Jester sent me a formula to make the snow, but I ended up with a heavy snow storm.  I tried a couple more ways, and ended up with some snow that I could live with, except that it was supposed to be animated.  The only animation that I ended up with was the "drats!"  "duh!"  "now why won't this work?" sort of stuff that was coming from me.  I cleaned that up a bit for you.  Here's my best shot at animated "but not moving yet" snow. 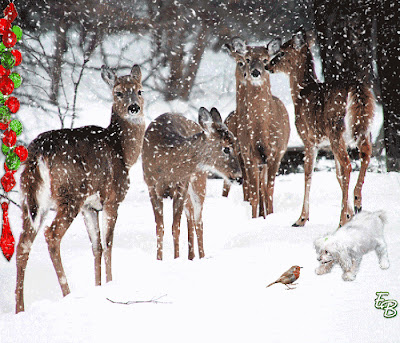 This is also a sneak peak at the December photo on my new calendar.  Minus the falling snow.  That one deer was simply fascinated with Tootsie who was having a wonderful time chatting with a little bird who wasn't prepared for all the snow.  I'll try again later to see if I can get the snowflakes to actually move.

Now I want to do a bit packing so that I can mail out the rest of my boxes/packages on Monday.  Plus, I need to go check the Christmas tree that Joe is putting up in the den.  I have a box of candy canes that he can put on the tree.  So, till tomorrow, Y'all have a fantabulous day.

Nice snow on the deer, I would never know that it wasn't real. How do you animate the snow? That sounds like fun.