I Was Almost Bald And Drunk!!!

It's a gorgeous morning, in more ways than just the weather.  Let me start at the beginning.  Yesterday morning, while the Mrs was asleep, I took out my trusty laptop to post on my blog.  BUT!  My laptop would not turn on.  Dead like doornails!  I thought "Oh dear, well I'll have to wait till later and post my blog from home."  There was still no power, so the rest of the day dragged along rather boring.

As soon as I got home, I plugged in my laptop.  Oh Oh!  Nothing!  I jiggled the cord and tried whatever I could think of but alas, no laptop!!  Panic began setting in.  I called Wayne, but as luck would have it, the man was on vacation and would not be available until the end of next week.

Finally I called a local computer store to see if maybe they could at least copy the hard drive to my external drive so that I wouldn't lose everything.  I took my laptop to their store, and when they plugged it in, guess what?  It turned on!!  Does this not frustrate you?

Back at home, I plugged my laptop in again, and OH NO.  It will not turn on for me.  I tried several different outlets throughout the house to no avail.  I went back to the computer store and told the nice young man that I was getting ready to rip out my hair and go on a drunk even though I hardly ever drink.  At least this put a smile on his face!

After a few tests, he discovered that my charger cord had died.  That's all?  A cord?  Folks, I won't be going bald just yet.  I could have hugged this young man.  So, $60 and a new cord later, I went home as though I had been given a new lease on life.

By now, I was mentally exhausted and not in the mood to design.  Instead, I hooked my laptop to my external drive and started making a backup copy.  Tootsie and I had our supper, grabbed a snack and crawled into bed to watch TV.

There was one really nice thing yesterday.  When I got home, there was a brand new rose opened in one of the gardens.  Such a soft peachy color.  Isn't this pretty? 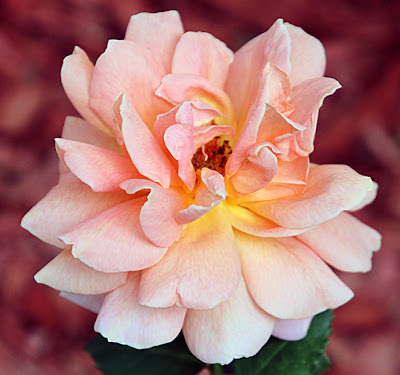 Well, now I have a few things to do around the house.  Thanks for letting me babble.  Till tomorrow, Y'all have a wonderful day.

I'm so happy things turned out well for you...it's hard to picture you as a bald drunk woman.

Oh whee, can imagine how you felt, with that laptop! Home nothing, in the store all fine, etc... Then one is going to question his brain LOL! It still took out some money of your wallet, but if that was only for the cable it's to overcome! You almost are glad to pay! Just to be assured all your stuff on your laptop wasn;t lost!!!
Now you can relax again and start designing again!
Have a wonderful Sunday
Hugs
Kyra

What a beautiful rose. I would love to see this one painted as the coloring is awesome. Those cords can wrap around your neck anywhere and anytime! Glad you were able to solve the problem.