Good morning.  It's 7:40 a.m. and it's 47F degrees, foggy and gray outside.  However, in just a couple of hours it should be sunny and warm.  The weather man says it will reach 85 degrees today.  Woo Hoo!  We'll have one more great day after today, then we're in for a week of cool and mostly wet temps.  October isn't coming in on a very pretty note.

These past couple of days have been busy trying to track down the whereabouts of the new storm door that we had ordered.  Friday, after the longest time over two phone calls to the store, I was finally told that the door was in transit to the store, but that they did not know which day it would arrive.  (at the store)

Yesterday, some one from the store called me with a "gentle reminder" that I still had a door there waiting to be picked up.  According to this lady, the door had been in the store all week since last Tuesday.  Excuse me?????

To make a long story short, once I calmed down, I called the store back and got a department manager on the phone.  After explaining the phone calls from Friday and Saturday, he said he would look into it and call me right back.  In a very short time, he called me back and said that he had found my door.

Yes, it had been there since Tuesday and he did not know why no one bothered to check it in and call me to pick it up.  Needless to say, I was just a tad bit upset.  To make up for all the hassle, the manager offered to deliver the door to my house before the day was out.  It arrived around 6 p.m. last evening.  Yeah!!!!

After supper, I settled into my lounge chair to watch a bit of TV and crochet.  The country blue afghan is getting very close to being done.  Only about twenty two more rows to go.  There is a young man on my holiday gift list that I think this afghan will be perfect for. 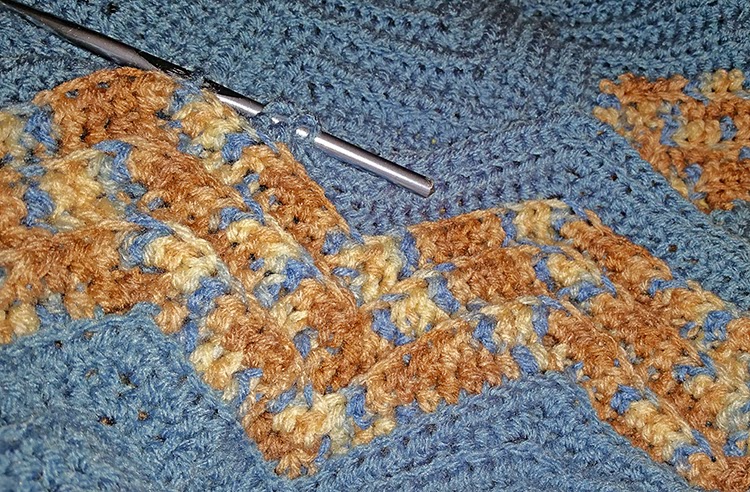 I did do up a few rows with the new Light Fern yarn, and it is really pretty.  However, I'm having a problem trying to find just the right color(s) to go with it.  Hmmm, such a problem!

Joe put the new chipper/shredder together, and we were all looking forward to having some fun playing with it today.  However, after looking it over closely, we've decided to box it up and send it back.  The opening where you put the leaves and twigs in is so small that you can only feed it a handful of leaves at a time.  As Joe said, it will take us a few years to clean up just the leaves  that are already in the yard.  Ah well, we tried.

DIL Janet said she would drop by later this morning, so I should get dressed and do a few chores around here before she arrives.  Till tomorrow folks, Y'all have a wonderful day.

You are cranking these things out faster than I can make my little dishrags!

You are really fast with those knitting needles.
Don't you just love spending hours on the phone for nothing. So glad they brought the door to you. Did they install it too.

I can understand you were "a little upset"after the phonecalls to the store for the storm door!
What a mess they made.
At least the manager tried to make it up to you to deliver the door.
Saves some time.
Then the shredder isn't all what you expected. Gosh, you didn't had a real good start of the weekend LOL!
so back to a search for another more useful shredder.
The afghan is beautiful, really something for a young man.
Now going to read your next post and then have to post and then must do several phonecalls too.
Hugs
Kyra

Oh, my mind was mixed up, you don;t have another post for me to read hahahahahahaha.