Good morning.  Pogo and I got up rather early this morning.  It seems he used his potty patch during the night and needed it cleaned so that he could use it again.  He's very clean, my little fellow.  Once all that was tended to, we had worked up an appetite so we had ourselves a little snack before heading back to bed.  Unfortunately, sleep was not going to happen for me, so I decided to watch TV and crochet a bit.

Yesterday, Pogo and I went to the yarn store to find some new colors to match a couple of blues that we are using for afghans.  Sad to say, I could find nothing to match what I needed.  So, I picked up a couple of new colors; "Frosty Green" and a really pretty variegated "Aspen Print".   Oh my, these two colors are working up so pretty!  I'll take some photos later today.

Later when Joe got home from work, we went to Walmart to pick up a few groceries.  You'll never guess what I found there.  Yup!!  I found a beautiful variegated yarn that will match one of my blues.  I'll take photos of this afghan too once I work up a few more rows on it with the new color.  It looks like I'm going to be busy crocheting for quite a while.

Last evening was Parents Night at the High School that Kevin and Jasmine attend.  Kevin had told his mom to look for a picture of him from the newspaper that was on display on a hallway wall. (I put an arrow pointing to the photo)   Of course the proud mama brought her camera along with her.  A lot of really great athletes have come from their city.  Kevin's older brother Bobby earned several awards for Wrestling when he was in high school.  Yup, we are very proud of our young 'uns. 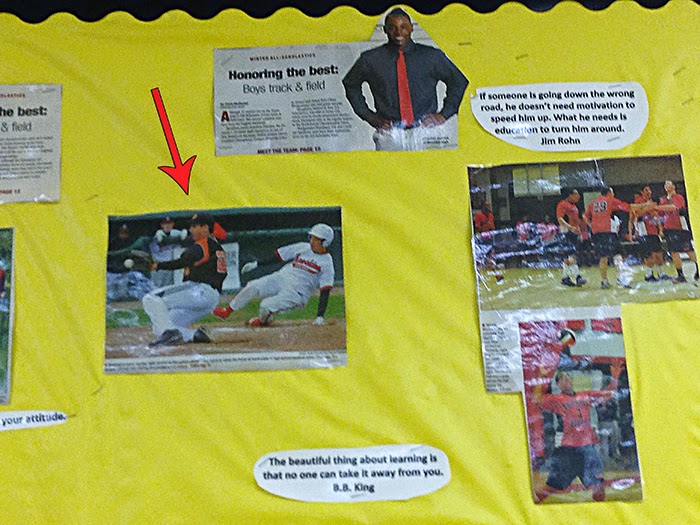 Today is supposed to be quite cool.  Only around 60F.  Right now it is 46F degrees.  Brrr!  And the nights are getting to be really cool.  Most nights the temp is between 42 and 46F.  It's a bit soon for such cool temps, so I hope this is not a hint of what's coming this Winter.  I've been hearing tales that we are in for a long cold Winter.  Gosh, I hope not!

Now I think I'll head to the kitchen and make a nice hot cup of coffee.   Mmm yes, that sounds like a good idea.   That and my long fuzzy bathrobe should keep me toasty.  Pogo is wearing a hooded sweater, so he's all set till the temps warm up a bit.

Well that's all the news for this morning.  So, till Sunday, Y'all have a fantabulous weekend.

Well, you are suddenly back on my dashboard. I swear I don't know what happens, but your post from this morning just showed up (it is 5:50 PM here)

I do know that if you go to bed on a full stomach it is hard to get to sleep. That is one reason they tell you not to eat after eight o'clock at night. But, of course, they don't know about people like you who get up in the middle of the night to snack :) Hope you were able to catch up on some of the lost sleep during the day.

I love that you are doing so much crocheting. You seem to find awesome colors. We don't seem to have any good yarn stores near here anymore. My favorite store that also had yarn just closed down ... sad, sad. I really don't have time to crochet for awhile ... I have so many pictures to go through, sort and edit ... I will be here at the computer until Christmas ... wait, then it is too late because I will want to make my Christmas card from the pictures. Oh my, why does everything turn into pressure ... don't understand it. Well, my dear, I am hoping that I am getting back on track with my blog and following my friends (i.e. you). Glad to know all is well and hope you get some warm weather before it gets really cold. We have been in the 60's and 70's for that last few days which has been really nice ... but they are saying we will have another cold front go through next week. Well, I guess it is what it is ... I just add another layer on when I get dressed. The thing I hate most about winter is how long it takes me to get all of my layers on to take Izzi out. She has her little legs crossed by the time I get ready. Well, I am back to normal because I am rambling again. All must be well, right? Be well, my friend ... Love to Pogo from Izzi!

Lovely you finally found some great yarn for new projects and also a matching one for the one you are working on.
It's hard not to find sleep at times, I always find that getting up for a while is best, and even drink and or eat something and often after an hour or so sleep comes back again.
When not, you will have to catch it up later today perhaps?
Of course Kevin's mom is proud of him!
Great to see he has his picture on that wall.
Try to take it a bit easy today, catch a little nap during the day later and you will feel fine!
Have a wonderful weekend
Hug
Kyra

Good Morning you two! So sorry I have been remiss is staying up to date, but this &*^%$# sale process is about to make me bald....ROFL! I finally got a few minutes to blog and trying to catch up. I so enjoy reading of your escapades and viewing your photos. You so deserve that award you got and I am hoping you are really enjoying retirement and all the crocheting you are doing, I know the results are surely lovely! So proud of your Kevin too aren't you! Hope it doesn't turn out to be too chilly too soon, even though it would really be appreciated here I think! LOL
Well, I think I read each day that I missed, so off to visit one more before I have to sign off, thanks for making my day! You and Pogo have a marvelous weekend...hugs, Mat

the new colors sound lovely and I'm sure you'll have tons of fun playing with them.