Good morning.  It's feeling wintry today, with much cooler temps, but at least the sun is shining.  Tonight though, we are expecting snow, then by morning it should turn to rain for the daytime.  Well, that's what the forecaster says.  We'll have to wait and see.

As I watch the news and the Weather Channel, the storms across the country seem to be getting worse and worse.  So far this month, at least two dozen people have died because of these storms.

I'm thinking that the climate change has something to do with all these wicked storms.  In all my years, I don't remember us ever having this many destructive storms.  Nowadays, it seems as though the storms just never stop.

It's very quiet here.  I had planned to go out this morning to do a couple of errands but we'll see.  I don't seem to have a lot of energy this morning.  Maybe later.  Yesterday was a fun day, as DIL Janet, Pogo and I went to visit my Aunt Lucy.  We had a wonderful visit.  On the way home, we picked up take out food, which we ate when we got back here.  Pogo took a nice long nap after he ate, and Janet and I had a really nice visit.

I did not take any photos last night.  Instead, I put the lights out right after supper and went to sleep.  This morning, I did my best to stay in bed as long as possible.  I guess all the hubbub of the last few days has finally caught up with me.

Oh gosh, I just got a call from my orthopedic doctor's office.  They were calling to cancel my upcoming appointment with him, and to ask me if I wanted an appointment with another doctor.  I really don't do well with change though.  The lady did give me the phone number to where my doctor is moving his practice.  So now I will call there to see if I can reschedule with my old doctor.

I do have a photo to share with you this morning.  I took this photo the day before Christmas, while I was at Walmart.  This shows one of the items being displayed near the registers.  I couldn't believe that people were buying OFF!  But look at all the empty sleeve holders.   I wonder where all the mosquitos were.  We don't normally get any around here in the winter. 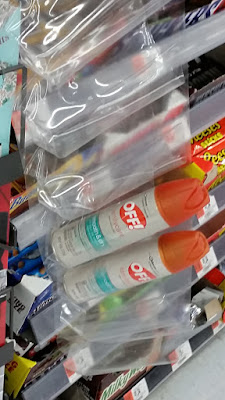 Well, it's getting close to noon so I think I'd best see about making some lunch for Pogo.  He's been dropping hints for a while now.  So, till tomorrow, Y'all be safe, and have a wonderful day.

Hi Edna,
It is feeling wintry here as well. Really tired after an exhausting night. I think that I need to go back to bed and sleep some more.
My visiting nurse has come and discharged me with my wound care. It is completely closed now but will continue to see me twice a week due to my diabetes. It is still rather high.
I had a rather hard day yesterday. I hate triggers because they lead to my depression so I decided to just start coloring. Wow what amazing therapy. I am not out of the woods yet. Sometimes thing that are out of my control sets me off on a downward spiral and no matter what I do it is a long hard fight. This one started off with a thank you that turned into a terrible argument. How can that be?
It is lunch time here and so I need to find some food, then color a little more and then a nap. That I can handle! Give Pogo snuggles and kisses for me. Love, Beth and Cisco.

Hard to believe people would need off in Dec/Jan - LOL. we don't have much moisture so rarely have mosquitoes here in Vegas. In Hawaii, it was quite a different story, there you need it year round, as the seasons don't really change. I think all those tornadoes, and flooding is so scary. I have quite a bit of family in Texas, but luckily for now they are all safe. I feel for all those poor family's who have lost family members, and their homes. I'm praying for them all.

I'm glad you had a fun visit, and a good nights rest. I'm slowly catching up my rest too. I love the holidays, but it can be hectic. i'm always sad after New Years, it's a long wait till the next holiday season.