Lots Of Nasty Bugs Going Around

Good morning.  Today we have sunshine, with the temps going up to about 61F degrees.  This will feel good after the last few damp gray days.  I must say though, I'm really missing all that gorgeous weather we enjoyed this past August.

The news this morning is not so good.  Ebola has reached our shores and has lots of folks worried, the enterovirus is spreading, with 538 cases in 43 states, and pneumococcal pneumonia is going around.  Seniors, especially, should check with their doctor to see if they should be getting a vaccine.

Yesterday, the burner service guys were here to clean out the furnace.  We are ready now for whenever we have to turn on the heat.  As usual, I'm hoping that we won't have to turn the heat on till the end of the month as it's still a bit early.  However, some of the nights lately have been downright chilly.

There's been a lot about drug addiction and drug abuse in the news lately.  It seems that some cities and towns are filing lawsuits against large pharmaceutical companies for deceptive marketing of their drugs.  These cities and towns are suing for huge amounts of money to cover the increasing costs of health care, substance abuse and addition.  In one city, emergency room visits due to misuse of opioids increased 65 percent between 2004 and 2011.

So, I guess instead of making the abusers responsible for their own actions, it is much easier to blame and sue the manufacturers.  I have never found (or heard of)  a bottle of pills with an "invitation" printed on it asking people to please abuse it.  Sorry, but I don't believe that suing these companies for large amounts of money is going to get rid of the drug abuse problem, nor do I believe that these companies are responsible for the abuse problem.

Nuff said!  I could ramble on and on about this topic, but I'm not going to.  Instead, I'm going to share a funny story from last Sunday morning.  Our squirrels were insisting on getting at the bird feeders, and I was busy chasing them away.  After a while, Joe handed me the comic section from that morning's newspaper and told me to read it.  I had to admit that it was very appropriate for that morning.

I also have a photo that I took just before this beautiful rose began to lose all of its petals.  This is most likely the last bloom of the year for this particular bush. 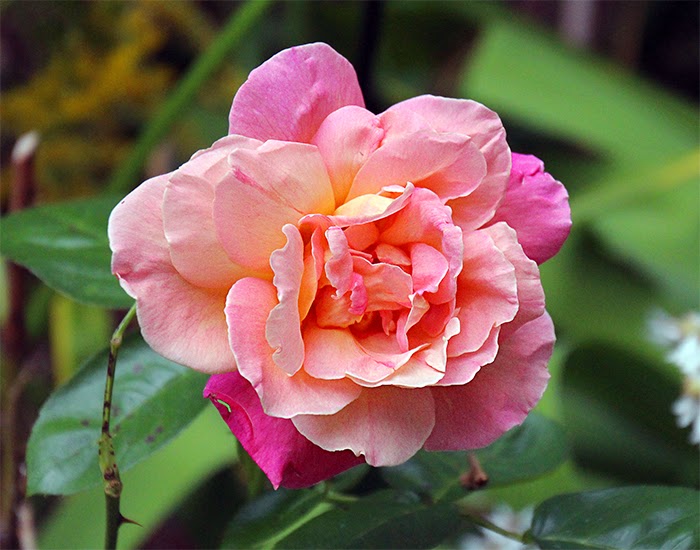 While I was shopping at Walmart this past Friday, I found a very pretty yarn that I just couldn't resist.  I bought a few skeins of "Banana Berry" and matched it up to some of the yarn in my ever growing yarn stash.  Of course, I had to work up a few rows to see how this new yarn was going to look, and oh my!  It is really pretty.  Later today I'll take some photos to share with you tomorrow.

Pogo is out in the pantry barking at goodness knows what, there's a load of laundry waiting to be put in the washer, and it's time for me to get busy here.  So, till tomorrow, Y'all have a magnificent day.

That rose is still lovely, even as it fades...much like us older women.
Banana berry is a fun name. I think I would have enjoyed a job coming up with names for colors of things like yarn, paint, etc.

The Squirrel cartoon is perfect. Izzi loves chasing the squirrels ... in fact I have to make a racket to warn them that she is coming because she comes very close to catching them before they can make it up a tree. I am thinking that maybe she doesn't really even want to catch them ... the fun is in the chase:)

Banana Berry ... okay is it yellow or blue and yellow or blue, yellow and red or ... what is it?? My imagination is going bonkers here. Can't wait until tomorrow to see it in your pictures.

Our weather has been very cold ... not freezing yet, though we have had frost. I have had to wear two layers already and I am using my lined jacket ... but no gloves yet. It is warming up this week, so they say ... that means we might make it into the 60's ... good grief! Isn't it a little early for this?

I am not worried about the Ebola yet, but the flu could be pretty rough this year. We haven't gone for our flu shots yet ... just keep thinking it is too soon, but time is flying so we had better get on the stick (broom :) Have you had your flu shot yet this year? best do it if you haven't. We old poops have to be cautious about getting sick. We have had the pneumonea shots so we are good for a few years yet with that. Yes, you are right about there being some nasty bugs out there and the cold winters don't help. Well, my FH just passed me on his way downstairs ... that means he is getting ready for dinner. Guess I had better go do something about it so I can get him fed. You have a nice evening of crocheting and TV ... stay warm, Edna ...Love to Pogo and Sunshine :)

Andrea @ From the Sol

Just a short comment tonight as I'm in a hotel in the dark! I know pain killer addiction terrifies me but I also know that the pain I live with because I fear the pills is more unbearable than the thought of addiction to as lot of people. If they are abusing the prescription it's their own fault but if they take a dug as prescribed and become addicted, that's the doctor's fault. there's just more money to gain from suing the drug company.

I'm getting my flu shot before the end of the month and I'm going to ask my doctor about the pneumonia shot too. MS doesn't play well with anything else!

Pogo at the door reminds me of of he call we got from the cat-sitter today. When she got there today, no Marco at the door! He snuck on the enclosed porch when we left last night and was there until she got there at 5 this afternoon. He's fine but I feel so bad!

okay, sleepy now. Take care of you and Pogo!

I am not worries about the ebola virus yet, for here in Europe and i think in the States it isn;t alarming neither.
But it is good they keep good control on it.
Sometimes it seems this is a "nice"thing to get people frightened and then they forget about other really alarming things going on in the world or about governmental laws pushed through, so we cannot but accept it.
The rose looks so pretty.
You have a wonderful day, so to Pogo who is having a blast with this new door!
hug
Kyra