Good morning.  The sun is shining and the temps are in the 60's.  The rainstorm that came through the other night was not so bad, and I actually enjoyed the winds that came with it.  I've been watching my email, hoping to hear from the person at the camera club in charge of competition uploading.  Until they get my email address into the system, I cannot enter any photos.

Tonight will be a long shift at work.  I'll be doing a twenty hour shift, but then I get Saturday night off.  Not a bad trade off.  I was hoping to do a photo walk this Saturday.  The official World Photo Walk Day will be October 13.  I want to participate in that one too.  I just need to decide on locations.

I've been laying low this week, hoping to stave off this cold bug.  So far, it's no better and no worse.  But I do have to catch up on a few things like vacuuming, etc.  I think Pogo may have caught a bit of my cold.  He sounds a bit stuffy sometimes.  I think I'll be making an appointment for a general check up for him, hopefully for next week.

Today, I will call up and get Pogo's health insurance started.  I don't want to be hit with thousands of dollars in medical bills later on down the road.  I've never had pet health insurance before, so this will be another first for me.

Remember that faulty railroad signal that I mentioned a while back?  Well, I think they may have fixed the problem.  On my way home from work one day last week, I had to stop  while a train came through.  I took a photo (don't ask me why - I seem to photograph almost anything!) that I will share with you. 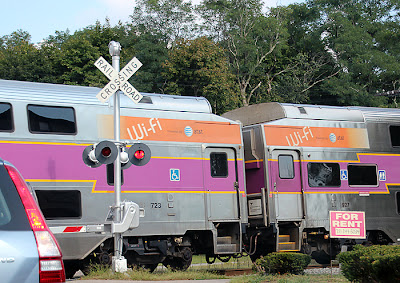 Notice the "for rent" sign next to the train tracks. The sign is actually in someone's yard. Imagine having a train pass that close to your house?  Also note that there is "Wi-Fi" in the cars.  Wow, how different from when I used to ride the train to and from work in Boston.  That was back in "1950"s".  Things have changed a lot since then.

Now I'm off to get me a cup of coffee, and stuff me into some clothes.  Till tomorrow, Y'all have a fabulous day.

I've been trying to get a comment to you for a few days. If this works I'll be writing to you more often! Leona in Florida

YEAH!! Success! I had to log in anonymously because my google account wasn't accepted! I've been enjoying your blog for a few weeks now and I love your photos! I've captured a few for my personal use ONLY, if you do not mind. I'm new to digital designing so I appreciate your freebies! Thank you! Leona in FL

Oh my, a 24 hour shift! That is looong. Hopefully you get a few moments to catch a wink.
Glad my backyrad is a small one and no train is passing through LOL!
Take care, hope your cold will come to n end finally,
Hugs
Kyra

That photo would be a good one to send to Ellen DeGeneres' show where she does what is wrong with this photo...the for sale sign at a RR crossing would certainly qualify and it is funny! Great shot! Hope your cold dissipates soon, maybe it's just allergies since ragweed pollen count is so high all over the country they say! Mean spores really attack the eyes, nose and throat for lots of folks. Anyhow, hope it is better real soon. Pogo too! Have a terrific day lady and a wonderful weekend too! Hugs!! Mat