Good morning.  I was kind of hoping to get up this morning and magically see the ground dry and the sun shining, but no can do.  It could be worse though, the rain could be pouring down.  Instead it's a light rain so I guess I'll survive.  Gosh, I'm sounding more and more like a wimp!

Is wimpiness (I think that's a word) another of the "golden" perks?  I can remember my younger days when I could take on the whole world.  Well, I couldn't really but I sure did try.  Life threw me so many mountains to climb that when things ran smooth it just didn't feel right.  Now, the smallest things make my little boots shake.

Want to know the one thing I've always been afraid of?  I don't know why, and I can't explain, but I don't like windows that are dark black on the outside.  They really creep me out and make me very uneasy.  I have to do a lot of fancy talking to myself in order to get along alone in a room with uncovered dark windows.

Growing up, I used to duke it out in the boxing ring with the biggest baddest kids at the Police Boys and Girls Club.  Today, a bunch of ants on my doorstep puts me in a ditzy frenzy and sends me running for a can of ant spray.  God forbid I should step on any of the ants and bring them in the house on the bottom of my shoe.  See what I mean?  Wimp!!!  (But I'm a nice wimp.)

Last night I played around in Photoshop for a while trying to make photo art out of a photo of a rhododendron.  I used several of my photos, and several of PS's blending modes and came up with this. 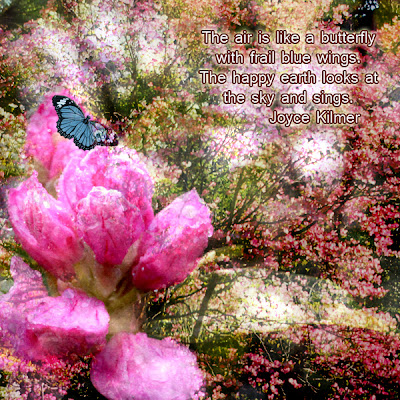 The verse I used is from a poem "Spring" by Joyce Kilmer.  (I found it on Google)  So I'll never be a Monet, but at least it's fun trying.  Actually, it's relaxing.  You start out at 8:30 with a photo, and the next time you look at the clock it's almost midnight.   Tonight I will play with it some more and see about turning it into a pretty QP for you.

In a little while, I have an appointment at the nail salon, so I think I'll take my camera and try to get some more neat raindrop photos.  That's one way to validate all this wet stuff.  Did I tell you that I was also a little bit nuts?  lol.  Till tomorrow folks, Y'all have a fabulous day.

You're not nuts and you're not a wimp. You're a really cool lady who embraces each day of life and I admire that.

OPf course you are a bit nuts, but in a great way! LOL. Just like me. And yes, getting older, you are chaning a bit, having fear (or something like it) for things you never was bothered with being younger.
Perhaps it has to do with feeling secure and rather safe, when things go steady, even when you still like a bit of adventure. But it doesn;t have to be with all too high peaks and valleys, kow what I mean?
Your "artwork" looks real nice. And it's true, being busy with something that needs your full attention, makes time run fast,
Have a great day,
Hug
Kyra

Okay, I can't speak for sanity because I look at pictures of little me and I'm convinced I was never there, but life is pretty wonderful on the nuts side of the fence, so I think nuts is just fine!

It's completely okay to find s you change, get older whatever, the things that make you frightened or at least uneasy change, while some fears never go away. I’ve always been terribly afraid of spiders. That hasn’t changed, but as my balance has gotten worse I find myself avoiding stairs at all cost. Even the stairs at home are scary to me. I don’t think it’s wimpy. It’s sensible.

If you don't react as quickly to ants in your home as you used to, the idea of ants possibly getting into your home freaking you out makes sense. You’re not a wimp. You’re practical!

Havew a great weekend, Edna! May the bugs stay out and may the sky shower sunshine all weekend!!